Update: Plume added, rebuilt using thread and pipe cleaners to keep it upright and separate strands, removed plasticard sticks and zip ties.  Also pulled the EL Wire which is being repurposed in my son's EL Hoodie. 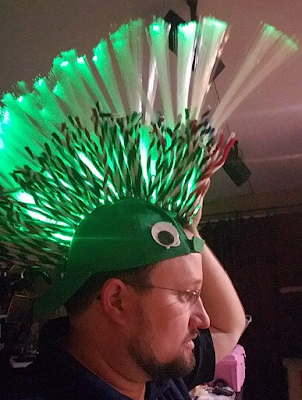 We were only able to print a few OFBC 2.0 cases before DEFCON 26. The leftover parts would have sat in my toolbox for quite a while if not for a serendipitous mistake: I ordered the wrong color LEDs from Sparkfun. This plus a little construction advice from a seamstress helped me cobble together the glowing headgear that is The Glowhawk

My courage and thinning hair prevents me from getting a mohawk while at DEFCON, but I've always wanted one. Instead I started to create one with a networking theme. Pipe cleaners in the color of Cat6 twisted pair served as a thick mane anyone could be proud of. This was wired onto a hat as a test. It looked OK, but it was kind of stubby to wear all on its own.

The LED driver for the OFBC is overdone. A single charge can last 10 hours on the original model. I wondered how much it could handle in terms of output, and a little breadboarding showed me I could wire several of the LED modules together as long as they were in parallel. Now how to use them?

The LEDs are these 3W green modules with attached heat sink. Direct eye contact is not recommended (hence the pains we took to use momentary buttons on the OFBC). On the beer light, we diffused the over-bright light so it could be sculpted by the drink it passed through. I was inspired by a fiber optic dress I saw elsewhere and found fiber optic table centrepieces for dirt cheap on Amazon. Some hot glue joined the disassembled fiber optics to the bright LED. The mane of glowing green was born!

With this fresh take in hand, DEFCON was upon us. I packed my things and thought I might take a crack in the evening. The Richard Cheese show was the perfect venue to solder everything together. The_bozo and I found a better place to work where the hot glue gun could run safely. I transferred the existing Cat6 mohawk to a bright green John Cena hat from Goodwill. Inside the channel that ran between upturned pipe cleaners, I hot glued the modules and fiber optics. Zip ties kept the fiber bundles from flopping around too much.

I consider the Glowhawk a great success, if a tad impractical. It lasted about 2 hours on a charge, and I was able to walk around wearing it with the mobile party crew for that long before it got uncomfortable.  A photo of me wearing it hit the DEFCON Closing Ceremonies, and my son keeps trying to steal my remaining fiber optics for a lamp in his room.

Future improvements include better internal support, googly eyes to cover the logos, and a fifth plume to fill out the front. See you next year! 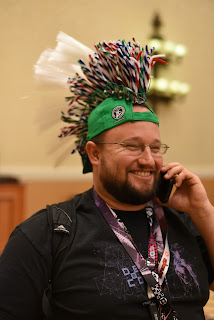 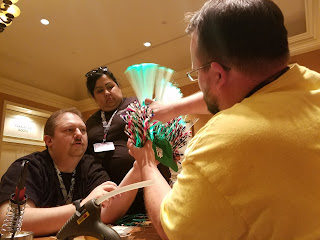 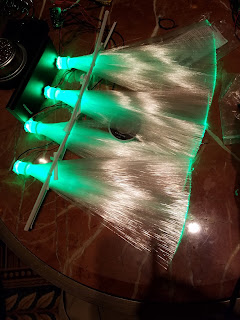 My father passed late last year, and I made three nondescript urns as keepsakes for family and friends. It was the first time I made a box of any respectability since 2000.  I hadn't originally planned to make them when he passed, but making them helped me process things in a difficult time.

I was the responsible party for my father's estate as his wife does not speak English very well. As such, it fell to me to arrange the funeral, notify friends, and start to organize his affairs. I kept it together. The arrangements were made, the bills were covered, and all in a few days. I kept it together, that is, until I tried to return to work. I got ready. I even got in my car to go. But I could not. Instead, I went into the shop and executed a simple design for holding a portion of his ashes.

The material is Indian Rosewood (the same that I used for the magnetic bottle openers). The strong grain made mitered corners a natural choice. I even had enough contiguous grain to try to book-end most sides. I didn't have a keyed or splined miter jig (which could have strengthened the corners), but I figured the lid and bottom would provide a good brace against failure.

Dimensioning the lumber wasn't very difficult; it was the geometry of the corners that caused me real trouble. I left the sides thick to give each box some heft. I eyeballed the lid thickness and shaved down some beautiful figured grain to just the right height (maybe I overshot it a little and had to clean it up later). When I got to cutting the miters, I found that I didn't have any accurate way to match them up. The miter saw was definitely not accurate from cut to cut. I lost a lot of material on the table saw trying to get a canted blade to just the right angle. I finally settled on using my miter sled. I had to cut the sides down a bit to make sure I could make the entire cut in one pass. By the end of this therapeutic day, I had three roughly identical boxes ready for glue-up.

The second half took a few more months to pull off. Uncertainty about the accuracy of the cuts lead me to put the project on hold. Should I delay and try to true then with a shooting board? My girlfriend gave me the most wonderful advice once: when you find yourself rushing a project, put it down and come back later. The parts to three urns marinated on the bench and in my mind for a few months.
A test fit in March didn't seem too bad. The time off convinced me to persevere and get them together. I discovered too late that I mixed up the orientation of the edges. My careful bookends were a jumble on two of the three boxes. However, the imperfect corners and dimensional problems worked to hide the errors amongst each other. Sanding trued up protruding tear-out and splinters without obvious rounded-off corners. Finally, dark stain and some paste wax finished the work of hiding imperfect joints in dark recesses and shiny polished surfaces.

I finished the bottom with plywood. If I had to pick a spot where I'm uncertain about my choices, it's here. Glue is strong, but how will the baltic birch bottom hold up over time? I'm thinking of throwing in some brads there just in case. The bottom served as a canvas whereon I could memorialize my father. I was able to burn the message "Invictus Maneo", the Armstrong Clan (and our ancestral) family motto. Loosely translated, it means, "I remain unconquered."

This entire project was an object lesson in how I'm still learning some of the most basic techniques in woodworking. I need a way to clean up miters that start on the saw. A shooting board or similar has been recommended. Fine adjustments on my existing miter sled might also work. Though it didn't seem too bad once finished, the tearout for certain cuts makes me think I have a dull blade. I'll have to investigate, tune, and try again.

I think I've worked through a phobia of complex geometry. Something my father always talked about is how to hide your mistakes in woodworking. Bookends, miters, and a fitted lid left precious room for that, but I found a few tricks along the way such as meticulous test fitting, blue tape as clamps for difficult pieces, and patience above all. Regardless, I'm looking forward to the next boxes I build. I hope those have a markedly different emotional footprint. 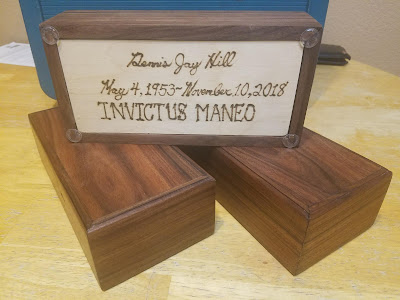 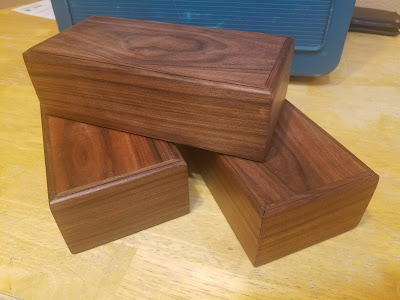 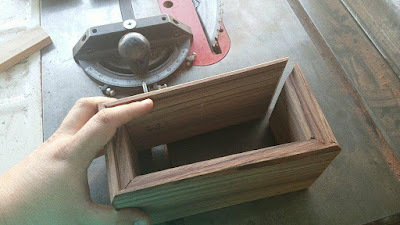 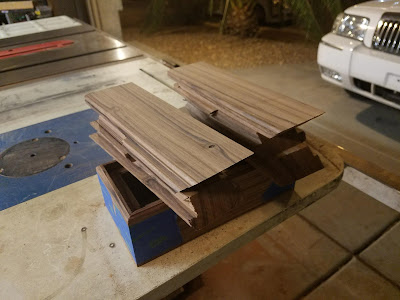 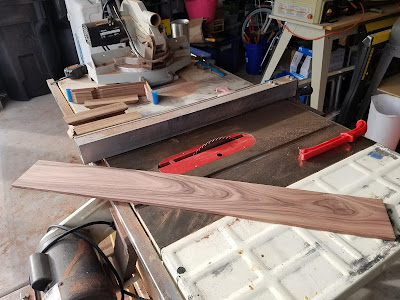 For Toxic BBQ 13 (DEFCON 25), we returned to the OFBC to see if we could improve the design and add some needed table decorations. 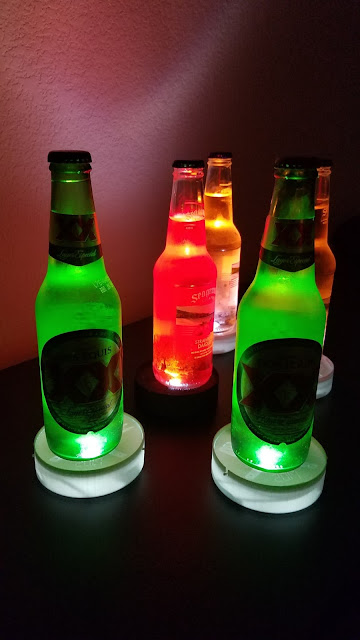 The first step was to simplify the PCB creation. I created a new layout in Fritzing that reduced whitespace. It also moved off-board components like batteries and the LED modules to use JST connectors for easy installation and swapping.  OSH Park did a great job with the PCBs. I was able to directly convert the Fritzing designs to printable format. Each board was less than 2 bucks by the time we finished. Never again will I make my own PCBs by hand. 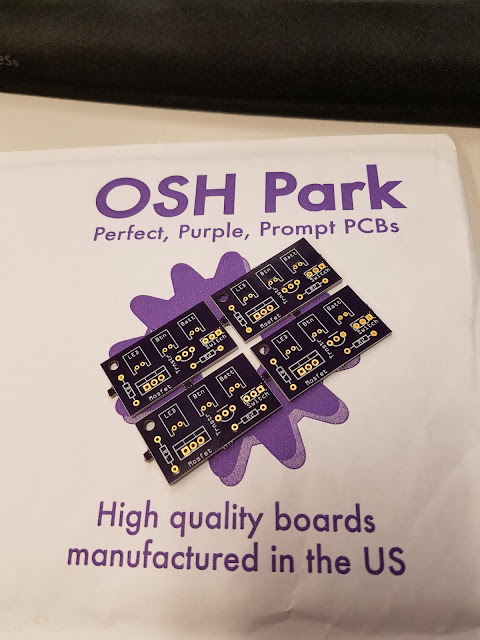 Sparkfun supplied most of the same components for about 15 bucks per light. Here is an updated BoM for this case:

Next, we redesigned the case. Instead of a three piece design requiring glue to assemble, the two pieces would be a base and a lid with a logo. Everything could be screwed into designed posts and covered with the lid. It was a snap. Production was easier with Shapeways. However, this lead to had longer lead times that prevented us from delivering to the barbecue. The prototyping went well and matched the designs, but the mass printings were so delayed that they didn't arrive in time for the barbecue even with expedited shipping. The resin product looked much better than the filament-printed 1.0 model. The cost at 20 bucks or so each was not prohibitive, but it certainly wasn't mass-market ready. 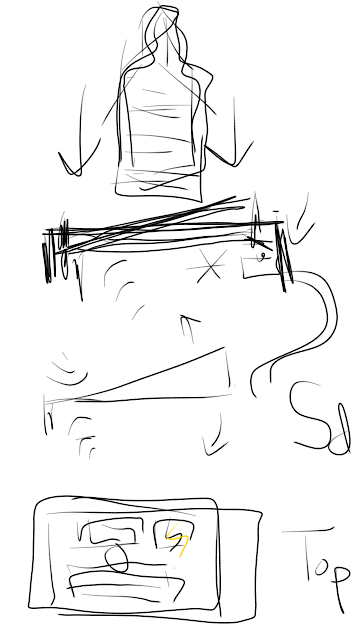 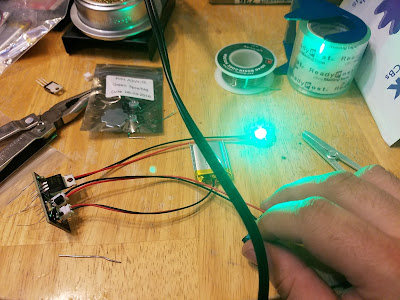