As night descended at Toxic Barbecue at DEF CON 21, everyone was working through the meat and alcohol they'd consumed much too fast and in much too large a quantity.  Rather than move the party somewhere else (Las Vegas' Sunset Park is safe at night, right?), we began to experiment with cell phone screens, then their flashes.  The lights were bright, but they were also extremely narrow in focus.

The Liter of Light project gave us an idea to use a liquid to diffuse the light.  As there was still copious amounts of alcohol left behind, we started experimenting.  This 'research' lead us to decide that Smirnoff Ice was the best diffuser.  Filtered beers were awful due to both the dark bottles absorbing light as well as the liquid having no solids to scatter any that was left. Smirnoff had the clear bottle and label as well as a ton of solids from the included fruit juice.  As this was a hacker party and not for frat boys, we had plenty left. The misogynists among us named them 'Bitch Lights' after the colloquial term for Smirnoff Ice: Bitch Drinks.  We had our product; now we needed to separate it from the phones. 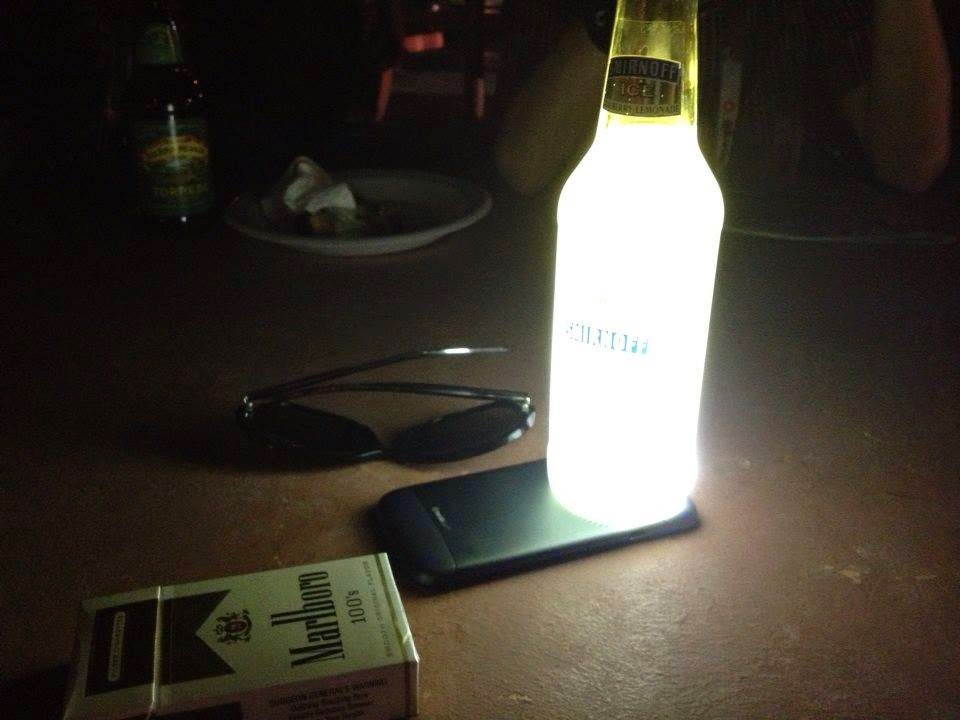 DEF CON 22 planning made us realize that we needed to make good on our promises made while too intoxicated to realize we knew nothing about how LEDs actually work.  First stop?  The local Hackerspace, of course.  SYN Shop is in downtown Las Vegas.  Multiple forum members are lighting and electronics techs on The Strip.  They pointed me towards specific packages, drivers and batteries.  I took this foundation and boiled it down to specifics.  I wanted the light to be composed of the following elements:

Armed with search terms from the forum, I found a wealth of helpful links.  I found LED packages that fit the "Super Bright" definition all over the web.  I learned a ton about batteries and chargers (did you know Sears still exists and has an online store?).  The most helpful site was Instructables.  There, I found several LED driver circuits that I actually understood.  After a trip to Frys left me bewildered with options, I learned to better read datasheets.  Finally, I had a working circuit design.
Posted by DuncanYoudaho at 7/18/2014 04:19:00 PM