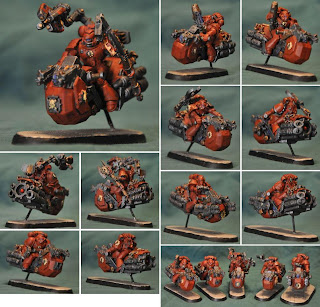 Not quite jetbikes, not quite ground bikes, these were a work of love. The innumerable hours collecting bitz, pouring over conversion articles and rice rocket pictures, gathering the courage to chop up a figure that costs $15 a pop...

1) Obtain a bike, new or used, remove rider
2) Cu off the front hub and reattach almost eactly 180 degrees rotated
3) Attach foot plate at high angle and to the rear.
4) Attach Land Speeder engine between the exhaust pipes
5) Using top plate off Rhinos, attach a section of the notched portion underneath to cover from footplate to engine
6) Add AC muzzles, LC muzzles and old Leman Russ LC muzzles to exhaust pipes for more thrusters.
7) Chop rider off at the knees
8) Attach rider
9) Greenstuff knees to reconnect. Expert sculpting of the crotch and seat to get them to ride just right as well as greenstuff smoothing skills are required to keep this from looking goofy.

The techmarine has a conversion beamer, the sarge has a clampy thing that could be a power weapon or power fist, depending on their battle role. One thing I love about conversions, they make sense no matter how the points are bought.

"Gee, those Elysian grav chutes look awesome. I wonder if you got enough together if you could lift yourself off the ground..."

This squad majored in dramatic posing during Ass Kicking University. The gung-ho sarge is always jumping off something while the rest are going around, over, off of and into another thing. We have superman taking off, in flight, hovering, and landing.

The theme base, piping, became clear from the start. If you don't see it on the base, expect it running underneath the tiles and out the sides. The Mega Man guns here are AC muzzles that have been turned into Bolt Pistols with small chain feeds or energy feeds or whatever. The blades are again vibro blades concealing a nano-wire suspended in a stasis field. This is the only known weapon held in more respect at AKU than the chainsaw sword. An 2 Elysian grav chutes are used per model. One set is placed on the backpack, another on the legs. 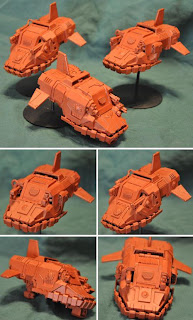 The inspiration for this model is obvious: Forge World's Tempest. The Tempest is a very simple conversion of the Land Speeder chassis and I wanted to combine the single seat cockpit with the integrated weaponry of the Rhino front ends.

The demise of a few speeders in a tragic PineSol incident left me with passable wings I converted into the tail wings. The cockpit itself is mostly plasticard jointed at just the right angles to make a passable crew compartment without leaving exposed rough edges.

Overall, I think this could translate well to the Storm by taking some cues from the Thunderhawk or similar.
Posted by DuncanYoudaho at 6/22/2010 11:14:00 PM