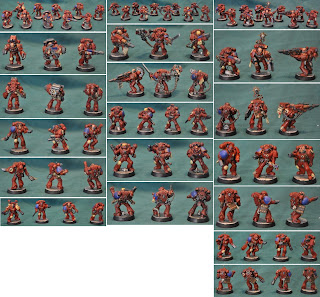 These 10 man squads were started before Combat Squadding was even a twinkle in GW's eye. Each features a decked out Sarge with a heavy weapon and assault weapon deputy. The rest of the troops use Mega Man arms for counts as Bolters and various cool poses. I started to run out of my supply of multi-lasers when IG was rereleased. The flood of unused ML tips was a godsend and helped me to finish my army post-haste.

In addition to Mega Man bolters, this is where the weighted and tiled bases as well as guitar wire came into its own. Every base has a nickel (5c coin) or chunks of pewter to give it heft even thought it's plastic. All bases are tiled with some accessory unique to the squad, and guitar wire speaks to the experimental (and thus heretical) nature of the Chapter. Lastly, each squad has their own personal fetish: a scroll or book at the hip or a power connector at their feet. This unifying theme helps to tie the squads together amongst the chaos of their wacky poses and non-standard styling.

Bog standard. These scouts are bog standard. Except when they're not. I mostly experimented with posing here. The spotter sniper, auspex sniper, weapon swaps, metal tabs clipped to integrate into tiled nonslotta bases. I used every construction trick I knew to add variety.

The only custom bit I added is an Ad Mech geared skull plucked lovingly from the tank commander marine torso piece. This gives them a winged geared skull. The only problem is I build about half of these guys before I decided to add the skull. Some ended up with just a painted gear instead of an actual bit adornment.

All of the above gets thrown out the window when we talk about the squad leaders. One is a Sergeant Telion stand-in with a custom bolter, the other is my father's favorite conversion which is now counts as: Thunder Hammer and Stomr Shield Scout! The other two are simple conversions meant to show the bulk of experience: Apothecary sergeant is looking for unstable neophytes and Crouching HQ Hidden Fist sergeant is waiting to snipe a BA Chaplain or Demon. 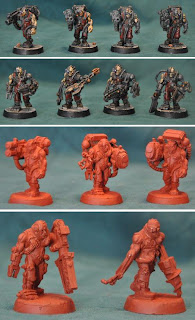 Ah the servitors. Simple conversions with leftover power claws (hard to come by in this army. I buy in bulk and am still left wanting...). Some are over the top, some are simple yet graceful. I tried to limit myself to one conversion. On one or two, I just couldn't help myself.

The weapon balance needs to be addressed under the new codex, but overall I give a good mix of options to confront any foe.

3 Rhino chassis displaying all the characteristics of my other Rhino CHassis conversions:
These conversions have a problem with WYSIWYG unless your opponent is generous (No top hatch = no shooting from it. No rear hatch = difficult to disembark. Low storm bolters = LOS sucks). But who wants to play with idiots anyways.