OFBC: Putting it All Together

After months of effort, we had a circuit, PCB and shell design to accomplish our goal.  Putting it all together meant solving some unique challenges in the home stretch.  By far the most communal part of the project was finishing the circuit.  Parts were bought by three different people.  It took hours of trial runs and four different nights in my shop to finally get the circuit assembled and ready.  In all, the project taught us to keep moving in spite of obstacles.

The main obstacle was PCB manufacture.  As detailed in that post, uncooperative copper and etchant lead to abominations not fit for solder.  Drill bits broke in PCBs, holes were misaligned, and traces were torn up as we worked and reworked the boards.  The major blunder was the reversed PCBs, but it was tempered by the lack of polar components.  Only the transistor and MOSFET needed to be adjusted when we realized our mistakes.  The quality checks and encouragement as we worked as a definite plus.  There were several times I wanted to just give up and abandon the project.  Truly, I get by with a little help fro my friends. 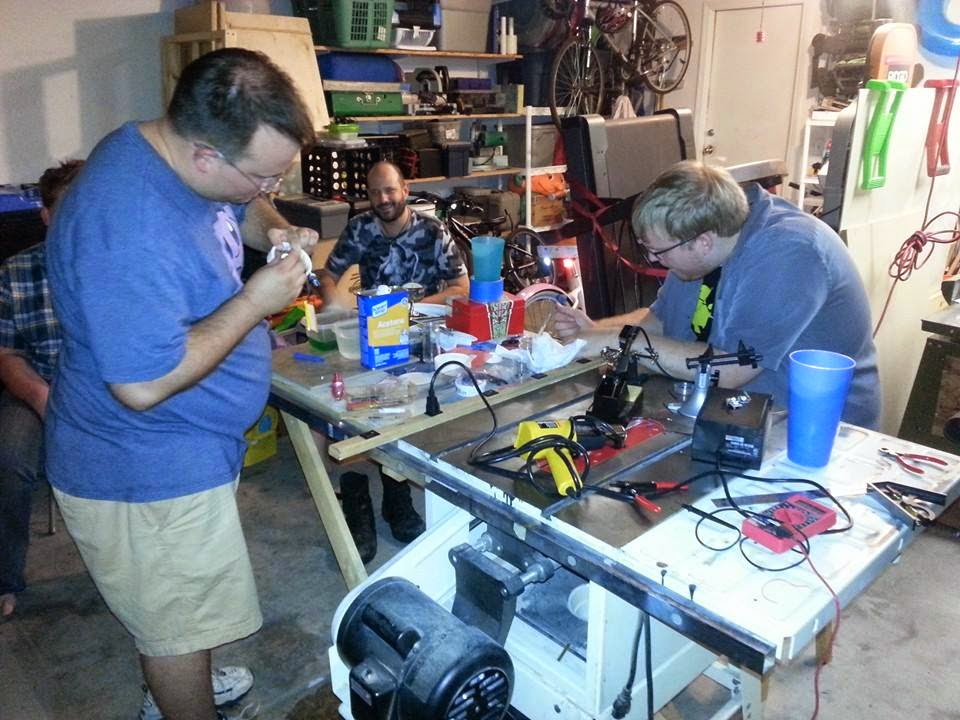 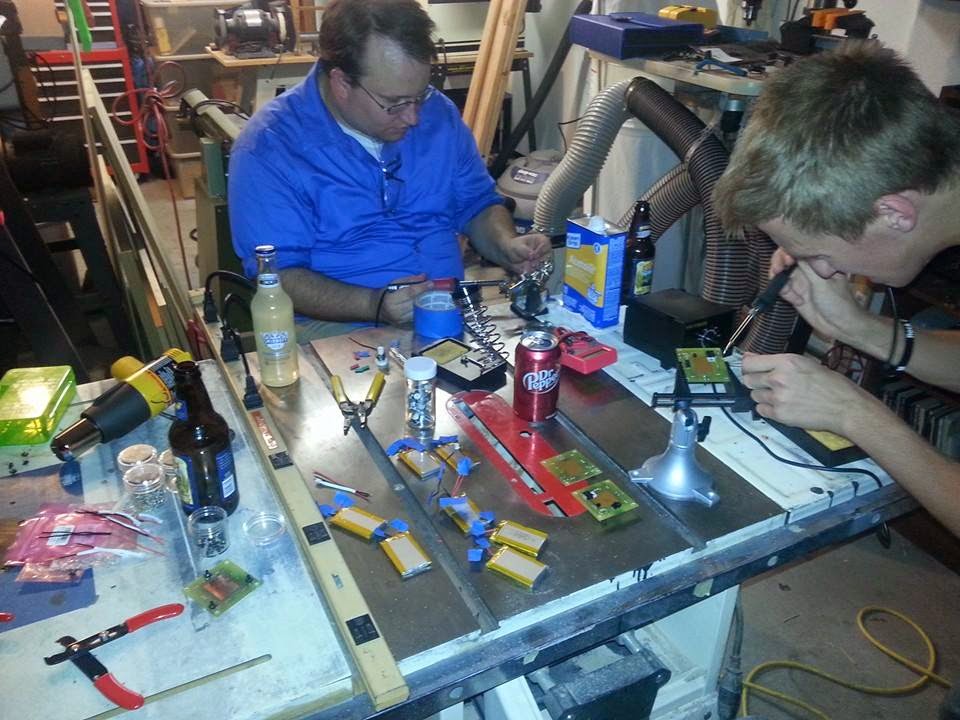 After the PCBs were in our hands, the task of soldering all the components was a team effort.  One person ran continuity tests on newly etched boards.  Another bridged scratches and pasted down traces.  Buttons (functional and fake) were inserted and crimped at one station while a fourth person began to solder on components. 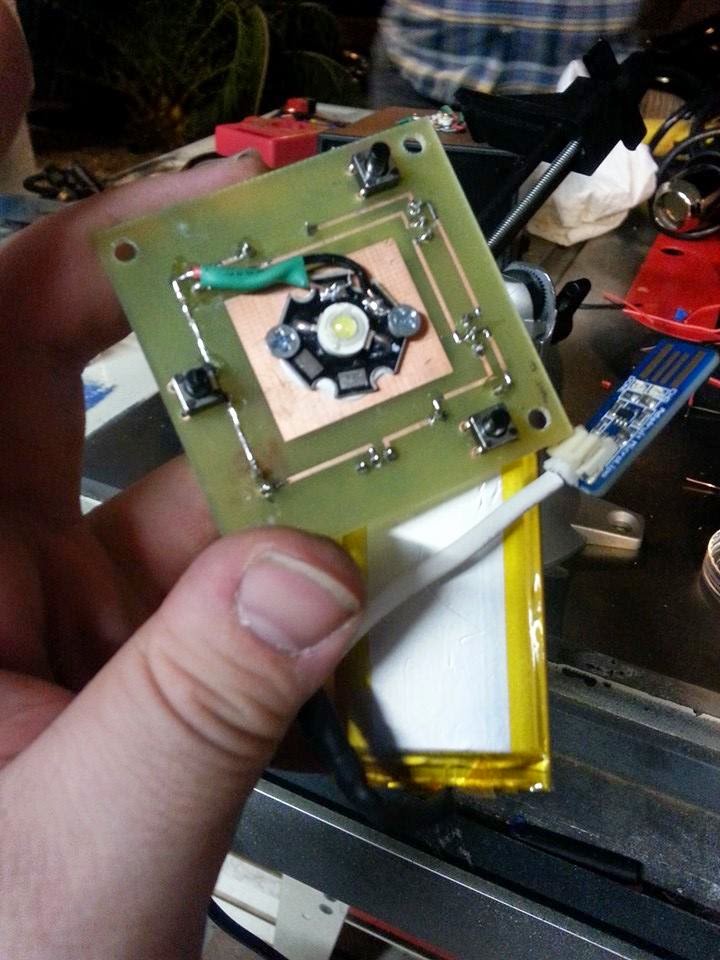 That moment of truth when the LED lit up was breathtaking all nine times it happened.  When it, more often than not, didn't work on the first try, the scramble to troubleshoot was a team effort as well.  A loose connection, bad trace or through hole in need of a reflow was rooted out in minutes. I can't describe the feelings from closing the box with nine functional copies of the idea sketched out on a picnic table the year before.

Shell manufacture forced choices between what we wanted versus what we needed.  The mechanical ideas at the outset gave way to manufacturing considerations.  Features were pared back to match timelines, work schedules and summer vacation.  Anyone reading this who has worked in an Agile Development environment will recognize similar decisions they make every Sprint.  To borrow a cliché, "Perfect is the enemy of good enough."  With this in mind, we have an eleventh hour compromise ready: should the 3D printer prove a roadblock, we have arranged for a Wednesday night Hail Mary meeting to turn Ziploc Containers into eternal glory.

The Ziploc idea produced 4 "just in case" models.  We stabilized them with glass beads and hot glue.  The containers became the shell and mount for the PCB.  The beverage lid was provided by another ziploc container hot-glued onto the buttons.  Hot glue for grip and stabilization of the platform finished the job.  See the result in the pic below next to the finished shells. Luckily, the 3D Printer roadblock was cleared just two days before the BBQ.  Poor quality filament lead to clogged extruders.  After a good cleaning, we were back in business.  5 shells total were produced with various upgrades.  We got a top that nested well with the shell, and the mouse-hole in the shell was added to allow the USB to be passed out of the body.  We did not get impressions in the top to get the lid closer to the lens of the LED.  We also did not get any part of the body held together by magnets.

Final assembly took place at Toxic BBQ itself.  The lights stayed on this year, but we started conversations and passed out some business cards with links here.  We placed a few on the tables farther out that didn't have light, and we presented two to the organizer in a Utilikilt.  Furthermore, it went on display in r00tz and the HHV for most of the convention. 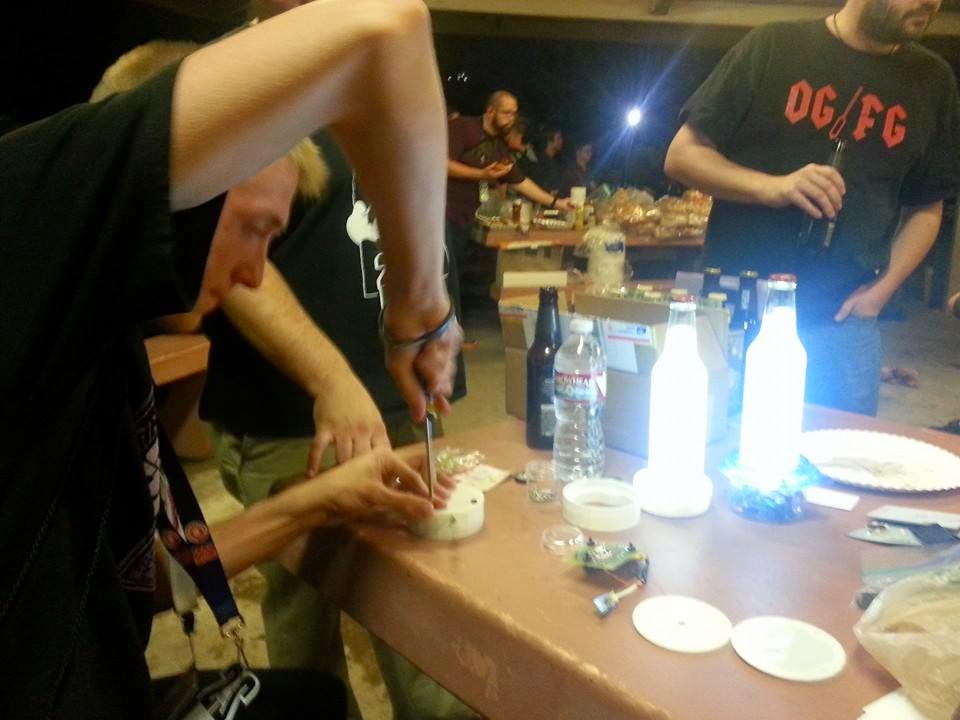 I left DEF CON for two years running with a profound sense of my own shortcomings.  I saw people around me doing amazing things, but I couldn't point to similar achievements for myself.  Though not terribly complex (most ideas came from Instructables, after all), the process and coordination required to pull off this simple idea has been eye opening.  It all started by pivoting from planning to doing.  It finished with an 80's-montage-worthy string of late nights and high fives. 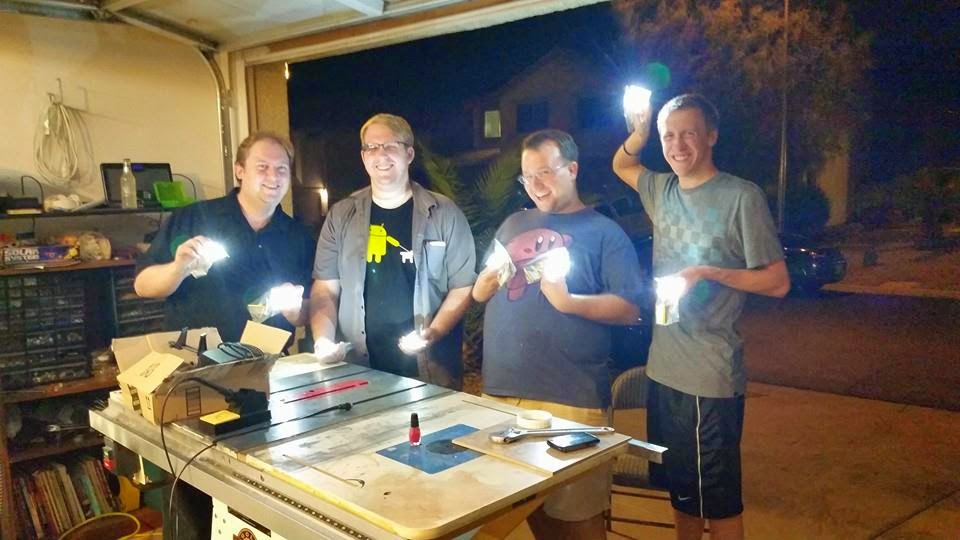 Already, these efforts are fertile ground from which numerous other ideas have sprung.  Facing another DEF CON, I'm looking for the next big project instead of lamenting my noob credentials.  Only time will tell how many of these work their way to reality.
Posted by DuncanYoudaho at 8/04/2014 12:15:00 AM